Although crossbows have been used for hunting, warfare, and sport shooting for centuries, they have experienced a huge surge in popularity in recent years. And it is no wonder; crossbows are relatively easy to learn, difficult to master, and an absolute blast to shoot.

If you are looking for a high quality, all-inclusive crossbow package that will not break the bank, the PSE Fang HD Pro Crossbow Package is a great option. It is a highly versatile weapon that could serve either a hunter or sport shooter very well.

A successful deer or elk hunt requires a bow that shoots at least 300 FPS. With a max velocity of 405 FPS, the Fang HD has more than enough power to take down any sized game. It is also fairly compactly built, making it serviceable in even the densest forest or undergrowth.

This crossbow package has all the features and accessories a new shooter will need to get started on their archery journey. 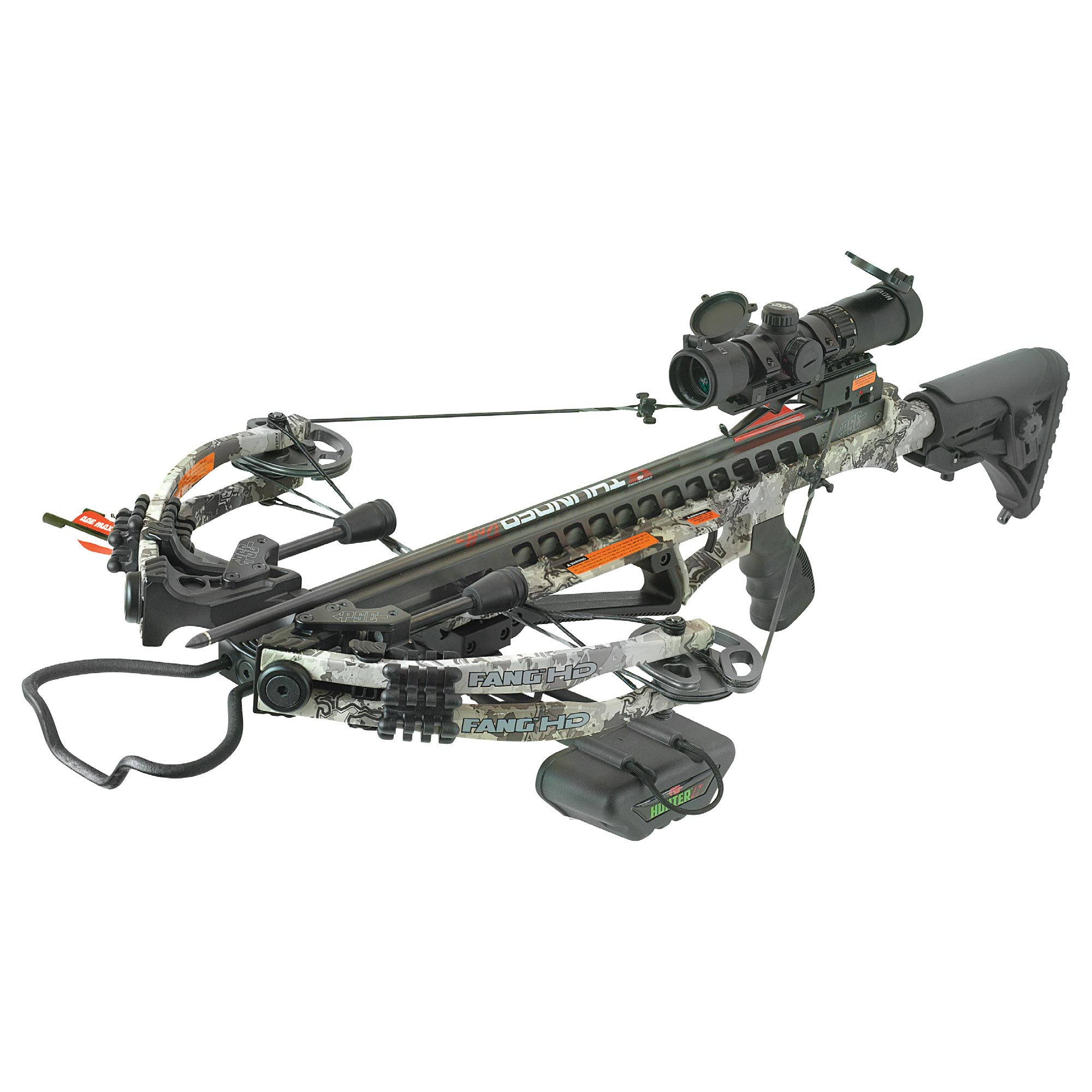 Precision Shooting Equipment (PSE) supplies only American-made compound bow and crossbows. PSE bows are durable and stand up to all manner of abuse, which is part of the reason why PSE has been a household name in archery for decades. The Fang HD is a welcome addition to PSE's long tradition of well-crafted, powerful bows with mass appeal.

Weighing in at 7.3 lbs. and measuring 18 in. axle to axle, this crossbow is light and compact enough for any deep wood adventure. The Fang HD has a 14.5 in. power stroke, allowing for its blistering 405 FPS velocity and 134 ft-lb kinetic energy.

This bow is 35.5 in. long and is finished with TrueTimber® Viper™ Western camouflage. It is rope-cocked and has a draw weight of 205 lbs., so rest assured, you will absolutely build muscle routinely shooting this weapon.

Like most high-quality hunting crossbows, the Fang HD has a built-in auto safety and anti-dry fire (ADF) trigger for shooter safety. These features help prevent misfires and also allow the bow to be uncocked without having to trigger the firing mechanism. That feature is especially helpful for hunters who do not necessarily want to have to dry fire their weapon every time they need to uncock to climb over a fence.

The biggest reason that new crossbow shooters quit the sport is rope cocking. Once you get used to it, using a rope is simple. However, be aware that there is often a learning curve.

On the one hand, rope-cocked crossbows take more strength and time to cock and make more noise than their crank-cocked counterparts. This can be a drawback for some hunters, so it is something of which you should be aware.

On the other hand, rope-cocked crossbows also have intrinsic benefits.

This model also has an adjustable stock, meaning it will fit a shooter of any size and can also be fired ambidextrously.

The PSE Fang HD Crossbow Package is everything a new shooter needs. Below are some of the biggest stand-out features.

Its HDV-425 1.5-5 x 32 mm. variable zoom illuminated reticle scope allows for aiming at a wide range of distances. This scope has nine distance increments ranging from 10 to 100 yards. This is ideal for both sport shooter and big game hunters.

The Fang HD comes standard with limb dampeners and string suppressors. These features both help cut down on excess vibration, which ultimately makes the crossbow quieter and more accurate. In addition, the Fang HD also comes with dual string stops. Like dampeners and suppressors, string stops are also designed for more silent, stable shooting.

This package also contains a five-arrow quiver and three 22 in. carbon arrows with bullet tips. Bullet tips are great cross-over tips, as they can be used for hunting but are not as heavy as broad heads, making them more routinely accurate for sport shooting and target practice.

Other notable features that come standard with the Fang HD include:

The PSE Fang HD crossbow is a fully outfitted, reliable piece of equipment. It would be a great way to introduce yourself to crossbow hunting or sport shooting without spending thousands of dollars on a bunch of different flashy accessories that you may not even end up using.

This crossbow's 405 FPS velocity ranks up there with some of the most powerful weapons on the market. In fact, the fastest crossbow currently on the market only shoots arrows 55 FPS faster than the Fang HD. It also costs almost 10 times what the Fang does for what is essentially only a 14% increase in velocity.

This crossbow packs more than enough of a punch for any type of hunting or shooting. The fact that it is rope-cocked may deter some shooters, but for the right person it is a precision machine at a great value.

If you are looking for a reliable weapon at a reasonable price, the Fang HD is a great choice. It is fast, simple, and highly functional. With its five-arrow quiver, variable illuminated scope, and bullet-tipped arrows, this package is fully outfitted for either hunting or sport shooting.

This crossbow has the same kinetic energy and velocity of crank-cocked crossbows at a fraction of the price. If you have used a rope-cocking crossbow before or are patient enough to learn, the PSE Fang HD Pro Crossbow Package is an excellent and affordable option.